Do Cats Purr When They Sleep?

Cats purr in their sleep during the lighter stages of their sleep, such as when they are drifting off and when they enter the dream state before waking. If you have a cat lying on your lap, you can see this. They will have their eyes closed and appear to be purring while sleeping and then suddenly stop. This is when they have entered deep sleep.

Can Cats Sleep While Purring?

Do cats purr in their sleep?

During deep sleep, cats do not purr. Often, your feline friend will appear to be sleeping as it has its eyes closed and is contentedly lying still. While in this state, it will make a purring sound.

Another time you will notice your cat purrs in his sleep is when he is actually asleep, during REM sleep (Rapid Eye Movement) or dreaming. You can tell when your cat is dreaming if you see its paws twitching and observe its eyelids twitching.

Is My Cat Purring or Snoring?

Do you have a snoring cat? This is especially relevant for obese cats and those with flatter faces and short muzzles. If your cat is sleeping deeply, it is very possible that he is snoring, not purring.

In most cases, this is not a problem.

One way to tell is to watch the part of breathing that causes the sound. Purrs occur with both inhaling and exhaling. Snores normally occur with only one.

If your cats snore has just started recently, you would be wise to have it examined by a vet to make sure the airway isn’t obstructed in some way causing difficulty breathing or that there isn’t something else going on.

A cat’s purr is a complicated thing. Let’s take a look.

When a cat purrs it is like the sound of a tiny motor vibrating coming from deep inside.

Scientists call it a purr. A cat owner may have their own name for it, such as the cat’s motor, love sounds, or heart song. Personally I love the name the ‘cat’s motor’ that is just what it sounds like to me.

The vibration has been rated as being 20-150 Hz. It appears that the cat’s purr serves many different purposes, although it is most often associated with the cat’s mood and the cat being happy.

How Do Cats Purr?

Cats actually have a purr button. No, it isn’t one you can reach out and push.

It has been believed that the purring of a cat originated in the cat’s larynx. However more recent research and a better understanding has suggested that the purr actually originates in the diaphragm.

This theory is supported by the fact that some cats can purr even when their laryngeal muscles are paralyzed. The exact mechanism by which cats produce this sound remains a mystery.

However, while the laryngeal muscles are responsible for the sound of a cat’s meow, the purr is actually produced by the diaphragm.

How The Purr Occurs!

When a cat inhales, the diaphragm contracts and vibrates the vocal cords. This vibration produces the characteristic purring noise. This low-frequency sound is then amplified by the cat’s bone structure, While the mechanism of a cat’s purr is not fully understood, it is believed to be a form of self-soothing.

Our feline friends often purr when they are content or feeling relaxed, but they have also been known to purr when they are injured or ill. This suggests that cat purring may have healing properties, and indeed, studies have shown that cats who purr frequently heal from injuries and illness more quickly than those who do not.

It is not known why some cats have loud purrs and others have purrs so soft you can barely hear them.

It is widely believed that cat purring is mainly on auto-pilot, although there are some types of purrs that seem to be initiated by the cat for a purpose.

Why Do Cats Purr?

Cats purring happens for a variety of reasons. One of the most common reasons we think about is contentment. However, cats purr while they are giving birth, when they are in pain, and during times of stress.

They have been known to purr up until the time of their death. In some rare cases, a cat may even purr when it is angry.

Kittens first purr when they are only a few days old. This purring is thought to be part of bonding behavior process with mother cats. The mother cat also purrs when she wants the attention of the kitten for feeding.

Purring has been found to heal bones and tissue damage. It can build strong muscles and decrease pain.

For these reasons, it may be a fairly low-energy way for injured cats to heal themselves and help with growth.

The purr then has many reasons:

Yet another reason that we will discuss later is a type of purr designed to get humans to feed them.

Do All Cats Purr?

All domestic cats have the ability to purr.

Some big cats also have the ability. With the big cats, the ability to purr is connected with the ability to roar. In lions and tigers, who roar, purring is not observed. Smaller cats, like bobcats and lynxes, purr but do not roar.

An interesting thing to note is that many animals purr other than cats. Rabbits, squirrels, and guinea pigs have been known to purr. Mongooses, bears, and foxes have also exhibited this type of behavior.

The purrs of all these animals sound a bit different, but they are all purrs.

Do Cats Purr When Alone?

If you set up a camera to see what your cat is doing while you are away, you will probably see it sleeping a lot. Another thing you will notice, if you have audio, is your cat purring. 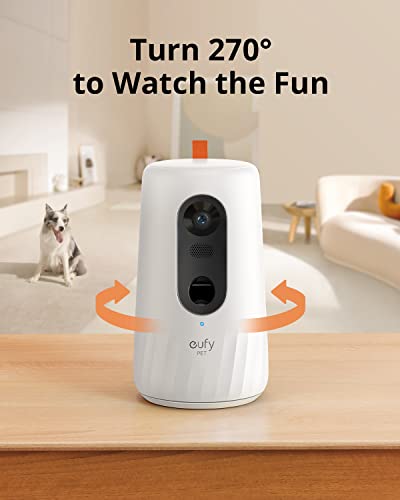 Note: If you are contemplating getting a pet monitoring camera such as the one above, for your home, please check the specs carefully. Some models and popular models at that require a monthly subscription after purchasing the product to get full use of the features.

Cats sleep an average of fifteen hours a day. Only about 25 percent, or less than two hours, of this time, is deep sleep

Because cats purr for many reasons, and the purr is often not something they consciously do, your cat is likely to purr whether anyone is around or not.

If he is alone, however, you don’t know whether he is purring from contentment or as a self-soothing act. Clues to this can be the position he is lying in. Content cats will lay with their front paws curled up under them.

Related: Why does my cat like to sleep between my legs or on my legs?

Do Cats Have Different Purrs?

Earlier we talked about cats having some different purrs. One that is thought to be actually controlled by your cat is a combination of meow and purr that communicates a way of asking the pet owner for food. The meow is higher pitched than the purr but the two combine perfectly.

Your feline friend is aware that their purr gains them positive attention. Cats do not meow when communicating with each other, although they have many vocalization sounds.

They do, however, meow to communicate with their humans. It is believed that this combination of purr and meow is designed to get attention quickly from their human food distributor.  We know it works!

Why Does My Cat Purr While Kneading Me?

Kneading is another way a cat shows contentment. As kittens, they kneaded their mother’s belly to help get the milk flowing. Milk was their greatest comfort in those early days, so they associated kneading with comfort.

You are now your cat’s biggest source of comfort. When it gets the chance to show you affection, it will often combine kneading and purring to show you its greatest affection and let you know you comfort it.

Related: Why does my cat knead me but not my husband?

Why Do My Cats Purr When They Cuddle Other Cats?

If you have more than one cat they are often curled up together and can heard purring. This purring serves two purposes.

First, it helps both cats regenerate and heal from any hurts. Secondly, it promotes bonding between the two.

What about cuddling with other pets? It is interesting to note that kittens who are only exposed to dogs will exhibit purring when they curl up with their favorite dog pal.

Can My Cat Purr on Purpose?

When cats do their combined purr/meow, it is believed they can initiate the sound consciously.

For the most part, however, cats are not in control of making themselves purr.

This is why your cat can be perfectly happy and still not purr. Science hasn’t come far enough yet to figure out a way to push that purr button at will.

Why Do I Feel Good Hearing My Cat Purr?

Remember earlier when it was mentioned that a cat’s purr is between 20-150 Hz? Not only is this a great healer for cats, but it is the same frequency that human medical doctors use when they do vibration therapy for people with arthritis and to treat diseases and other disorders.

The cats purring is felt in you when you pet your cat and it helps to heal muscles and bones.

Studies have shown that human bones tend to heal faster when a cat frequently purrs in a vicinity close enough to reach the broken bone. When you are bonded with a cat, they often seem to know instinctively when you are hurt.

This is when they want to be near you the most. It may seem difficult if you are in a lot of pain, but if you are willing to allow the cat close for even a bit, you may feel pain easing.

Petting your cat has also been proven to help with other health issues such as reducing blood pressure and promoting a sense of well-being. When you are bonded with your cat, you want to see the cat happy.

Purring Gets The Thumbs Up!

Since purring is normally considered connected with happiness, you may feel happy knowing it is happy.

There’s nothing like sitting on the couch with a purring kitty sitting on your lap or beside you. Just give me a hot chocolate and a good movie and I’m happy. Of course this is after I’ve had my daily exercise and followed a healthy diet all day. I wouldn’t want you to get the wrong impression.