Why do cats bring you toys? It might seem like a random occurrence and typically for cats, there is not just one reason. So the next time your kitty delivers a cat toy to your feet, be sure to give him a big thank you

One thing is for sure, the cat is certainly trying to get your attention and often your approval. We often attribute toys being dropped at our feet as more of a doggy way of behaving than a typical cat action.

Many cats engage in this behavior, not all cats.
Your cat might never drop actual toys at your feet but may bring home prey, which to him is a gift the same as a toy.

Why Do Cats Bring You Toys

Why Do Cats Bring You Toys At Night?

Why Does My Cat Bring Me Its Prey?

Can You Encourage Your Cat To Bring You Toys?

Why Does My Cat Bring Toys Into My Bed?

Why Do Cats Bring You Toys

Cats bring you toys (dead prey included) because they want to play or show you what they have caught by bringing the prey home. The two are interlinked.

Here are some different approaches as it is not necessarily as simple as the cats wants to play.

There’s your cat sitting in front of you with his new favorite toy, looking at you expectantly. He wants you to play with the catnip toy, and he dragged it all the way from its hiding place (under the bed) just for this purpose.

The cat wants to play and ideally wants you to take part in the playing by bringing you a toy.

Cats often carry toys in their mouths when they approach their owners. And this specific behavior makes it seem like your cat is giving his or her toy to you as a gift.

However, this is not just a token of his appreciation and love for you. It is believed that your cat dragged it across the floor to get your attention to play with them.

It is a sign of affection that your cat is showing just how much he trusts you by bringing you his favorite toy.

Hunting for prey and in a domesticated setting, toys, is part of a cat’s ancestral heritage. Female cats, would teach their kittens how to live on their own and how to hunt and kill.

She would begin by bringing home dead animals for the kittens to consume. Then would go with their mother at a young age to develop hunting skills and learn how to hunt on their own.

This is mostly not the case these days but it does help to explain the reason behind bringing home prey.

Why Do Cats Bring You Toys At Night?

Your cat brings you his favorite toys while you are sleeping because, in the middle of the night, he or she has a lot of pent-up energy and is attempting to amuse itself.

Cats are active between dusk and dawn. You may already experience the cat gallivanting around the house in the middle of the night.

Cats understand that we will be asleep for many hours and won’t have time to play with them.

At night, cats will play with their toys. The cat may bring you toys while you are sleeping to try and get you to play with them. This can be annoying, but it is done out of good intentions.

The toy is being delivered to your feet, it is almost certainly going to mean it is time for play. Not all cats do this. Tom, a long time resident in our home would never fetch and carry toys.

His overall interest in any toy was fairly short lived and mostly commercial cat toys were a waste of money. However, there was something that would be delivered for our appraisal on a semi regular basis.

Dead rats were Tom’s toy of choice and yes, once, live prey. A live rat in the house did really freak us out. Sorry Tom but we could not bring ourselves to be happy about that episode. Of course the cat wasn’t reprimanded either. He may have guessed from our screams that we weren’t that thrilled.

He really was the Pied Piper of the neighborhood.

Bringing home dead rats was his version of bringing us some toys. We weren’t thrilled by this however over time we did get used to it to some extent. It was part of our life with Tom and we accepted his desire to bring gifts from time to time.

Tom was not an outdoor cat but he did have access to the backyard through his cat door which could be closed at night.

Related: Do you think your cat purrs when he is sleeping? Maybe!

Why Does My Cat bring Me Its Prey?

Cats are solitary hunters who do not hunt in groups. Domesticated cats bring their alive or dead prey, for example a dead mouse, back to you because it’s part of an instinctual behavior left over from wild cat ancestors who had to protect themselves against larger predators while eating a fresh kill.

Bringing back food to a safe place is more important to some outdoor cats than actually eating it.

Domesticated housecats also feel the need to protect their prey, in this case their toys are their prey, from other predators.

Can You Encourage Your Cat To Bring You Toys?

You can always encourage your cat to bring you toys by buying or making them toys that closely mimic the look and feel of real animals.

How many mice cat toys have you seen? They come in all shapes and sizes, even interactive mice toys. These toys are meant to mimic the behavior of a real mouse and some of them are pretty realistic, to us anyway. 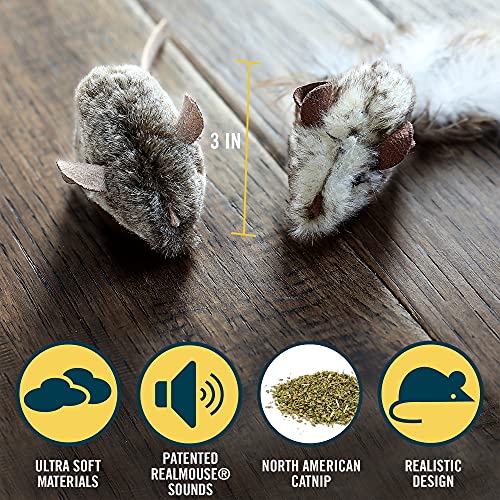 Indoor cats will happily play with toys, particularly if there is input from you.

Interactive toys have given a whole new meaning to cat toys where you don’t have to be as actively engaged. Is that a good thing or bad thing? Neither. Just be sure to keep actually playing with your cat and not relying on interactive toys.

Despite all of this cats cats never lose their hunting instinct.

Related: Does your cat like to wriggle right under the blankets so that he is a blob in the bed? This always makes me smile!

What Do You Do When Your Cat Brings You A Dead Animal?

Our cat did his rat catching at night. In the morning we would be greeted by rat remains that looked as though a surgeon had been at work.

Often the cat was not nearby and the rat was disposed of so that we could have breakfast in peace.

If the cat was nearby, it was just a quick – good kitty – (hard to sound genuine) and once again the rat disposal squad took the rat remains away.

The Benefits Of Having A Cat That Brings You Toys

A cat that interacts with you by expressing interest in playing with toys is a gift to be cherished.

Take photos and videos and enjoy the time you have playing with your cat.

Related: Cats often sleep curled up tightly in a ball. Why do they do this, apart from trying to keep warm?

Why Does My Cat Bring Toys Into My Bed?

A cat has a natural instinct to hunt and bring food back to their den. Cats were strictly hunters before they became domesticated pets, and while many have adapted well to indoor living, the intense hunting instinct remains strong today.

If a cat becomes bored or is not provided with enough mental stimulation throughout each day, they often turn to their most natural hunting skills such as pouncing and stalking to release that energy.

When your cat brings a toy into your bedroom, it’s likely they are imitating the act of bringing home prey back to their den. While this is a normal behavior, it can become annoying if you are trying to sleep or if the toy becomes bothersome.

What You Can Do To Keep The Toys Off The Bed?

If your cat insists on bringing toys into the bedroom, you can train him to stop by providing an alternative area for play.

Get a nice scratching post and place it next to where he sleeps at night (you may want to put this up before they start bringing toys into your bed). This scratching post includes a nice comfy bed so does double duty, place to scratch and sleep. The whole unit is compact which makes it easy to move to another location. Your cat will be less inclined to bring random objects into your bed if they have their own designated scratching post to play with.

If all else fails, you can try providing them with an automated toy that will move on its own, which should provide enough entertainment for your cat (noise can be an issue with some interactive toys, so take that into consideration). 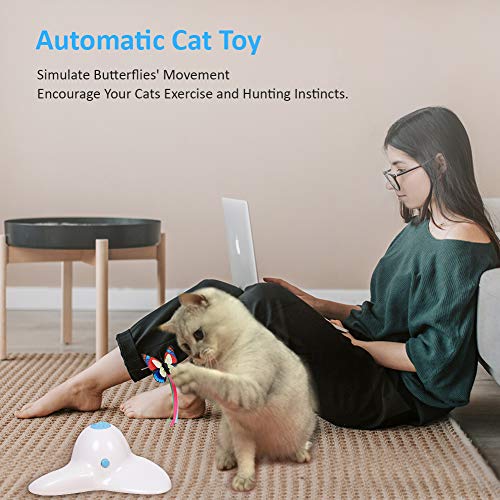 What Does It Mean When My Cat Brings Me A Toy And Meows?

The cat who brought the plaything is trying to greet you and get your attention by meowing. Let’s face it, meowing probably usually works very well. His message is quite clear that he wants to play. Although a cat can’t understand all that we’re saying to them, it is true that when we are happy, upbeat and relaxed, it can make a cat feel happy also.

Related: Some cats love to sleep between legs. Suddenly you are trapped!

We have to always remember that cats as gorgeous and pretty or wild and fearsome as they are and many points in between were not always domesticated and do still retain quite a few habits from ancestral times.

With all of this quirky behavior we can often see a reason linked to ancestral times. it is no wonder that there are so many quotes and funny one liners and observations about cats.

My cat keeps bringing me toys is a message for you. Your cat wants praise and wants you to play with him. Here is a selection of some of the best cat toys.

Disclaimer: These toys have been chosen by a human not the cat.