The previous couches were upholstered in a durable fabric and they had worn extremely well and survived general family abuse, such as, food, drink, pets, teenagers, and the occasional small person.

The cat had scratched the old couches but not in a serious cat attack.

I used one of these rubber brushes which worked really well for picking up and removing cat hair. The couches always looked tons better after I had used the rubber brush. Removed dusty bits that accumulate on couches as well as cat hair.

As the fabric on the couches was tough, the pilling could be somewhat hidden by throw rugs and strategically placed cushions. He did have a scratching post but it clearly wasn’t enough.

New Addition To The Couch Family

Finally, at our peril as it turned out, we replaced the fabric covered couches with two leather couches.

We weren’t prepared for what happened next! A leather couch and cats is not a good mix.

The cat literally made a dash for the new couch and dug those claws in, resulting in holes in the leather.

Our response was immediate – Get Off The Couch Kitty! but over the next few weeks it became a major problem.

The thing is, the cat had had free reign with jumping onto the fabric couches so the leather couch and cats problem was actually our problem not his. We hadn’t anticipated this issue (weren’t thinking clearly) and we couldn’t sit and watch the assault and damage.

The leather couch and cats combination was not looking like a good idea at this point.

Even if we could keep him off the couches during the day he could do whatever he wanted to in the middle of the night.

Related: What does your kitty get up to in the middle of the night? Our cat charges around the house doing crazy galloping.

Another annoyance which sounds minor but also became an issue was the throw rugs that had been used on the old couches now just kept slipping off the new leather and somewhat slippery, couches.

Sure they could be thrown onto the couch, in that casual Home Beautiful way. As far as covering the couch, they just didn’t work anymore.

So we had to make a plan and it was rather haphazard at first with just trying to cover the couches with the throw rugs. That became tedious night after night plus the whole couch had to be covered so it was really quite a rigmarole.

My enterprising OH designed and made some throw over couch covers made from, wait for it, heavy duty black plastic. Not my fabric of choice!

Not a great design feature but we were desperate and for some reason we had a lot of heavy duty black plastic – don’t ask! The shed is a place I rarely venture.

Related: Is your cat indulging in floor destroying? Another cat behavior that might seem odd to us. There are different reasons for floor scratching behavior.

Leather Couch And Cats! What Were We Thinking!

The plastic covers had to be put on the couch each night so still a hassle, actually major hassle. Also they did tend to slip a bit so the next step was to attach some lead sinkers (the fishing type) to strategic points so that the cover could stay in place weighted down by the sinkers.

Now, it’s starting to get really silly. We were in way over our heads and there was no turning back.

And, those black plastic covers as clever as they were, were really hard to fold up and put away. Then where to put them became another problem. They needed to be nearby, but black plastic is a bit of an eyesore, to put it mildly.

Plus wrestling with heavy black plastic when you are ready for some shuteye is no fun at all and just adds to overall crankiness.

The Solution – I Found Some Covers

Finally, after searching online and not knowing exactly what I was looking for I found some semi fitted fabric covers which were a similar color to the leather couches and could hip, hip hooray, stay on the couches.

Life was restored to pre leather couch days. I still took the covers off when guests were expected but everyone else just got used to the covers. I often forgot all about them being there at all.

I should mention that they are easy to wash. Because they are largish, I put one at a time into the washing machine and they washed beautifully and dried quickly.

This option was a lifesaver. It’s the little things that can become such a chore and putting those covers on each night and taking them off in the morning, was driving us crazy.

I should add that the cat has multiple comfy places to hang out, in almost every room of the house, on the windowsill to gaze out at the world, on the bed with a comfy blanket to soak up the warm afternoon rays of the sun, on a sheepskin and so on.

Related: Cat Scratchers Made From Cardboard – a wonderful invention!

I’m Just Not That Into You Any More

Strangely, after all of this has happened the has decided, for the moment anyway, that he isn’t that into leather couches and when he does jump up, it is softly and to sit on us, not the couch. Maybe this is because he is getting older and in this past twelve months he has aged a lot.

It leaves me thinking – Did we solve this Leather couch and cats problem or did he? Nup, not even going there.

The couch protectors were a lifesaver and have since been out on loan to someone else with exactly the same problem. 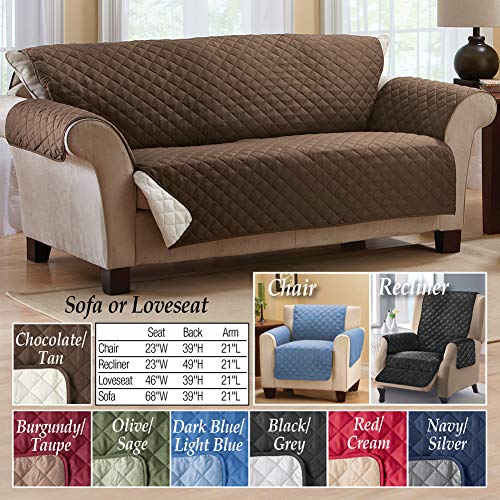 These protectors would also be great for families with toddlers and also for grandparents looking after grandchildren.

Furniture is expensive and having the covers just means it doesn’t matter if the cat is sitting there or if something is spilled on the couch.

We just took the very long way to find the solution.

Whoever invented these scratchers does deserve a gold medal. They are brilliant. Cleaning up tufting bits of cardboard is better than having furniture scratched. There can be a way to live with a leather couch and cats. 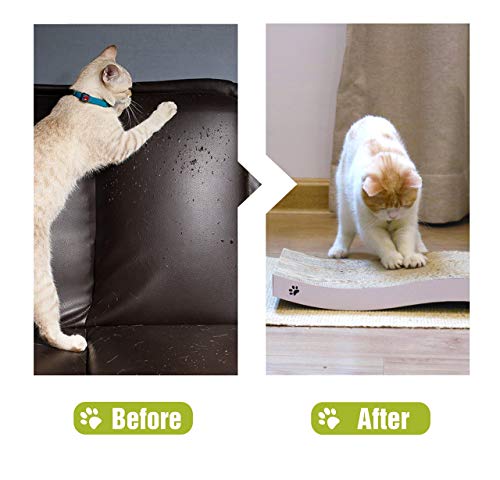 The scratchers are so practical and there is a design to suit any situation.

They are also inexpensive and can be replaced easily. Some have refills which makes them particularly good value.

Related: Does your cat scratch you? That is a no go! 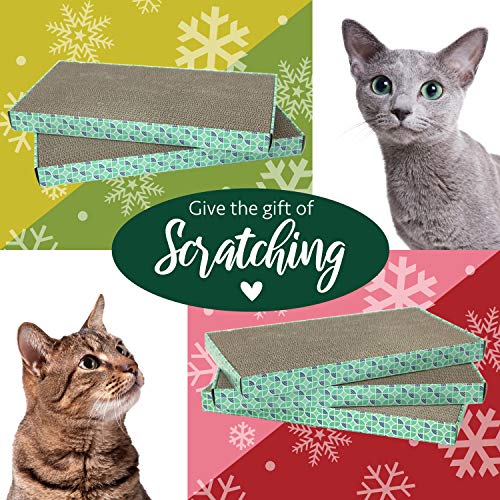