Some pet owners think their cat is just like a dog. Why do some cats act like dogs? Cats that act like dogs are most likely to be found in a dog household where the cat is treated pretty much like the dog and picks up dog like behaviors.

You may know someone who says “My cat acts like a dog because the cat is around dogs all the time.”

Pet dogs are more likely to be “obedient” than felines. However, despite the idea that dogs are more trainable than cats, there have been several studies suggesting that our feline friends can be just as intelligent.

Cats who act like dogs may benefit from training. Keep in mind that your cat may have his own reasons for being obedient, he may want to play or he could want food.

There is no “most dog-like cat breed” since all cats and dogs are very different, but it’s important to keep in mind that cats tend to be more independent than their canine counterparts.

In general, the most independent cat breeds include those from the Egyptian Mau, Ocicat, Oriental Shorthair, Siamese and Sphynx breeds. Other cat breeds often described as wanna-be dogs are the Abyssinian , Manx, Ragdoll , Siamese , and Burmese.

The Manx breed is known to channel its inner dog at times. They display the ability of coming when called or whistled by their owner and jumping around obstacles with no fear and even burying toys in the manner of a dog.

Do Cats Who Act Like Dogs Need Obedience Training?

Every cat has his own unique personality which means that some kitties may benefit from obedience training while others simply will not.

However, cats who act like dogs may not necessarily need obedience training. Cats are different from dogs and simply because your kitty isn’t as obedient or because he doesn’t seem to want to learn tricks, this does not mean that you cannot properly train him.

Cats will respond well to positive reinforcement training methods which can be used to teach them simple behaviors such as “sit.” These types of actions can help you bond with your pet while also keeping him active and engaged!

Our Cat Was Trained To Respond To A Command

Our cat, Tom showed that cats can be trained. I should add that he was the sort of cat that didn’t want to sit on a lap, he was a rat catcher, an independent cat. The reason for the training in the first place was because we fed the birds that turned up at house daily. Cats and birds, not a good mix, so train the cat was the answer.

The cat was trained to sit, by giving him a small portion of the food the birds were getting – ground meat or minced meat. The cat learnt pretty quickly that he had to remain by the side of the person with the food, to get his treat and he had to sit.

Fast forward some fifteen years later and the cat’s behavior was automatic. He wandered about amongst the birds and although the birds were almost certainly different birds over this period of time, they took no notice of each other. The cat still got his treats and the birds theirs.

While it is true that dogs are more likely than cats to enjoy playing fetch, the concept of “fetch” varies greatly among different breeds. Some will play fetch for hours while others would rather walk away and do their own thing!

For example, if you have a cat who acts like a dog then he may love to chase after his favorite toy or ball. Will the cat bring back the toy? Maybe! Maine Coon cats have a natural curiosity, which leads them towards games that require plenty of chasing and fetching – such as balls and toys.

If your cat loves chasing after things, you can also help her burn off energy by using an interactive cat toy like the one below. This one turns itself on and off, a handy future. 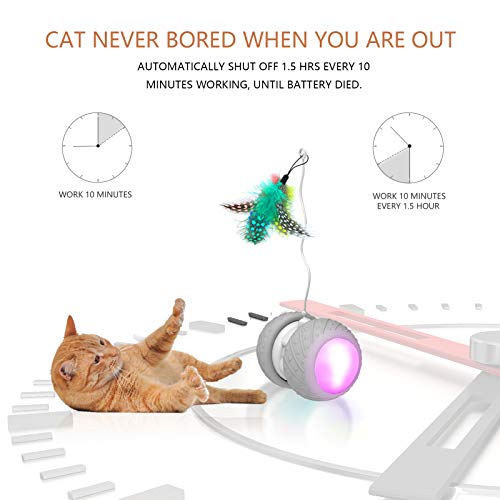 Most Dogs Like Water! Do All Cats Hate Water?

Some cat breeds love water. In fact, the Turkish Van and the Turkish Angora from Turkey are cat breeds famous for their love of aquatic activities! These cats love to swim and spend time at the beach. It is not unheard of for Turkish Vans to go boating with their owners!

Do Cats Who Act Like Dogs Get Along With Dogs?

Many people incorrectly believe that dogs and cats cannot live together peacefully. YOu know the saying – They fight like cats and dogs.

Do all cats hate dogs?

Not every cat breed is going to get along with every dog, even if they act alike! Keep in mind that some cats will never get along with other pets while others can learn how to coexist peacefully.

Cats who act like dogs may initially feel intimidated by big dogs (or small ones!) because canine companions tend to be larger than felines.

If your cat acts like a dog, it’s important to have him properly introduce himself to your other pets. For example, if your cat is very friendly you can let him say “hello” by walking on a leash.

Would Cats Who Act Like Dogs Make Good Therapy Animals?

Could cats who behave so much like dogs become therapy animals? Research shows that emotional support animals can provide a number of benefits, including relaxation, reduced anxiety, and even healing. And there’s no reason why cats couldn’t provide these same benefits.

In fact, given their independent nature, some people might even find that cats make better emotional support animals than dogs. After all, they don’t need to be taken for walks or given regular baths.

All cats love toys. For example, some cats will bat things around (especially if you use a wand toy), whereas other cats might prefer interactive play where they hear the sounds of a device.

The best way to keep your pet entertained is by offering a variety of both stationary and motion activated cat toys as well as interactive play sessions with you!

Is It Okay To Let Dogs And Cats Stay Together If They Act Like Mates?

Many households have happy cat and dog families although on closer inspection it may be that one animal comes off second best. As a pet owner it is wise to be aware of this relationship. Much depends on the temperament of the animals involved.

It’s never a good idea to house your pets together without supervision, even if they’re friends! If the animals cannot be supervised then it’s best to separate them until you have a better understanding of their relationship dynamic.

Watch for any signs of discontent. If your cat is avoiding using the litter box, it may be that he has to cross the path of the dog to reach the litter box. This could cause undue stress on the cat and the cat may decide it is too scary to use the litter box and so sets up another lots of problems like urinating and pooping in places other than the litter box. You will need to be sensitive to such matters in your home if you have a dog and a cat.

Although dogs who tolerate cats can be gentle around their feline friends, they may not be aware of how strong they are, especially if the canine has never lived with a cat before! It’s important to monitor your pets carefully when they’re together so that you can step in when necessary

Over time, however, some dogs may learn how to behave around cats so long as you take proper precautions such as making sure that the animals are always separated when unsupervised.

In addition, keep in mind that dogs who act like mates with felines may revert to their instincts when in an unfamiliar environment.

Can You Train A Cat To Act Like A Dog?

It may be possible to train your cat or kitten if he acts like a dog, especially if the cat’s behavior reflects that of the canine companion you want the cat to mimic. Many pets will mimic each other’s behavior when they live in close quarters—this is one way in which cats and dogs learn how to coexist!

However, not every kitty is capable of mimicking his or her pet counterparts so don’t be discouraged if your pet doesn’t immediately display the behaviors he or she has seen in another animal if housed together.

With patience and positive reinforcement, it is possible to teach a cat many of the same behaviors that you would train a dog. For example, you can lead a cat on a leash, teach it to come when called, and even get it to obey basic commands such as sit and stay.

Of course, cats will never be able to match the level of obedience of a well-trained dog.

For those looking for a companion that is a little less work than a dog, a trained cat may be the perfect pet.

How To Hide Cords From Cats We know that cats have a tendency to chew on things. This behavior can be extremely dangerous …

If you’re allergic to cats, you know how much of a hassle it can be to live with a cat or even visit …

A little bit of backstory: My daughter decided to adopt a tiny white kitty living in the neighbor’s garden. This also coincided with the …

Why Does A Cat’s Belly Hang? Does It Bother The Cat?

Have you noticed that your cat’s belly seems to hang lower than the rest of its body? My cat’s belly has been hanging …

What Cat Furniture Do You Have For Your cats? A Fair Bit!

Someone said to me “What cat furniture do you have for your cats? When I really thought about, we had amassed a small …